Posted by Debra on Wednesday, 23 April 2014 in Musings 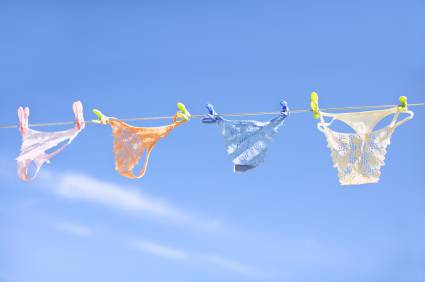 I was born in Tasmania. And I grew up on a dairy farm. Beautiful countryside but, hey, who cared? It was so far from everything.... or so I thought. I recently went back and visited. Not that far from everything after all (at a place called Elliott - between Yolla and Somerset on a Tassy map).

I was a curly haired child (still am 'curly' but thank God for hair straighteners and product!) who hated having my hair combed, brushed or touched. Still hate it. Back then I wore a hat and lied about having had my hair brushed..I was also a feline lover. Still am. Many a night I fell asleep with mother cat and kittens tucked up under my blankets, warm as toast.

I remember visiting my nanna who lived on the beachfront at Penguin. Standing in her kitchen I looked next door and was gobsmacked at what I saw on their clothesline. Coloured knickers! Couldn't believe my eyes. I wanted those knickers, those beautiful colours, lined up side by side. Much better than the boring white cottontails I had always worn.

"Nan, whose are those?" I asked, pointing to the clothesline next door.

"Where did she get them, nan?"

There and then I knew I absolutely HAD to leave Tasmania. I had to get me some of those coloured knickers...

12 years later I left Tasmania for Melbourne. Where I belong. Where I should have been born. Where my adult life began... and the catalyst? Coloured knickers on my nanna's neighbour's clothesline!

What shaped your life? Anything as mundane as coloured knickers? Or something more....