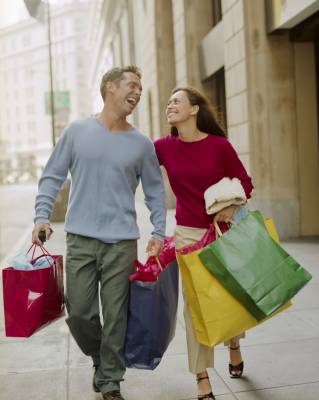 Consider shopping.   Many women enjoy doing it, seeing it as a form of entertainment or a social experience shared with like-minded, well, women. Men, on the other hand "tend to not enjoy the same shopping experience as a woman."

To get them to go shopping in the first place and then engage them in the experience you have to be able to communicate more directly to them. No doubt you’ve heard the saying: “Treat others the way you’d like to be treated”. Some of us even try to live by this rule. However, when it comes to selling – it is sooo wrong. It should actually read “treat others the way they’d like to be treated”. And this is particularly true when it is a saleswoman selling to a man or a salesman selling to a woman.

Men tend to be much more transactional in buying style. Transactional selling that depends on data, benefits and problem solving has been most comfortable for men and the male way of conducting business. The steps in the transactional model follow the way men think and handle a sale. These are: open the sale, discuss what you offer, describe the features and benefits, handle objections and close the sale. The weakness of this model are: relationship building is downplayed, communication tends to be one way, the female buyer’s need for detail and connection are often ignored, and the closure of the sale can come across as manipulative.

Learning the transactional model can be helpful for women selling to men. The challenge for the saleswoman in selling to a man is to stay focused, be direct with facts and not over-communicate.

Tip: Never use the “F” word when selling to a man. Eg. “How do you feel about...” Instead, bring it back to the world of logic and fact and say “What do you think about....”

Ideally, men would be delighted if saleswomen would:
Talk to them in bullet points;
Talk facts and logic not feelings – and stop asking lots of questions... ‘just give me the facts’
Not get emotional;
Be prepared to spar and ‘negotiate’;
Recognise that when they want more information they quite often appear to be arguing and not to take it personally;

Women have a buying style that is more relational but may move to transactional based on time and the product. They tend to be more brand loyal than men, but they’ll leave their brand if the service is bad.

The relational method of selling has been more female in style with its emphasis on the relationship between seller and buyer. Women tend to trust people with whom they can form a relationship. A woman’s buying style (relational) differs from the typical male style (transactional) in that there is more and deeper communication between buyer and seller during the entire sales process.

When a woman likes a product or a salesperson, she lets others know – LOTS of others. (Remember, she talks four times more than men. And with the help of social media right there on her mobile phone ... need I say more?).

But the Relational style is often vague and difficult for male sales professionals to follow.

But here are some tips that will help:
Look the woman in the eyes when she is talking;
Let her talk (even though you know the answer and could have fixed it 5 minutes ago);
Ensure your eyes don’t glaze over (a sign of disinterest and, make no mistake, she’s picked it up);
Participate in the conversation – don’t just fire facts at her;
Women tend to ask questions as a way of including you in the conversation not just to find out information.

If you don’t do this you’re likely to hear her say, “I need to think about it” or “I need to ask my partner”. She won’t necessarily confront you but you’ve lost the sale. Why? She doesn’t like you, hasn’t related to you. She’s going somewhere else where she’s treated better.

Now, what to do, when a man and woman buy as partners?
According to Marti Barletta author of Marketing to Women and PrimeTime Women, when men and women buy as partners, women control at least four out of five stages of the purchasing process.

And further, Barletta notes that even though men are present and appear in control during the purchasing stage when they pull out the credit card or sign the contract, they are not really in control of that stage either – they just think they are. A lot happens way before then that actually determines the decision of what is bought.

If women feel strongly enough about a product, service or company they will recommend you, and because they take this role so seriously, they will be convincing. And then the cycle begins. When they talk, another woman’s buying cycle is kicked off, research begins and so on. Make sure you are paying attention to all of the stages.

And here’s the kicker: 84% of all retail sales are made to women! Get it wrong and you could be affecting the future of your business...

(These are generalities and, by no means, hold true 100% of the time)