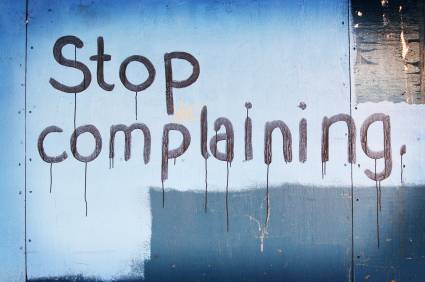 Sometimes we need to draw the line between the upset customer with a legitimate problem and the chronic complainer who consumes our time with unreasonable demands.stop complaining.
First, make sure you’ve got a chronic complainer.  Here’s how you can tell:

How to deal with chronic complainers:
Don’t hesitate to interrupt them.  Rephrase what they say to show you understand.  Eg. “I realise you’re upset because you’re dissatisfied with our efforts to correct the problem.  I know how annoying and frustrating that can be.”  Empathise but don’t take sides.
Realise that chronic complainers usually exaggerate problems and are masters of the sweeping generalisation.  To deal with that, try to get them to face the facts: Example  “You said you tried to see her all day.  Just how many times did you try?  Did you try at a bad time – when she was at lunch or tied up on the phone?”
Don’t apologise if you’re on the receiving end of the complaint.  Complainers don’t think about solving the problem.  They seek to blame someone.  If you apologies, you play their game  Try questions such as “Would giving you a replacement solve your problem?” or “When would it be more convenient for you to give me the information I need?”
Try to force complainers to solve the problem.  One good way to do this is to limit the time you’ll spend dealing with the complaint.  To do that, say something such as “I have to leave in 15 minutes.  Can we get this straightened out by then?”  This can force complainers to stop their griping and think about how to correct the situation.
Walk away if all else fails.  Some complainers will never quit griping no matter what you say.  If you’ve empathised, tried to get them to see the facts and attempted to get them to solve the problem and they still complain, you’ve done all you can.  It’s all right to write them off as hopeless.

Tagged in: blame chronic complainers moan to others whinge
Debra