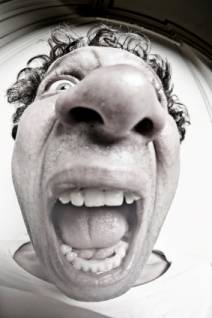 I recently met a genuinely funny man ... funniness beams from him.  In fact, I'd met him a few months earlier at a seminar I was running on the Gold Coast but didn't realise it.
To ensure that mobile phones don't blast my seminars (because I want people to absorb what I'm saying, not just 'attend')  I always give people the choice of turning their phones off, onto vibrate, silent or leave them on.  The only thing is:  If they choose to keep it on and it rings in the seminar, they will be asked to stand and sing "I'm a little teapot" and do the actions.
Back to my story:  He came in late to the seminar and missed the message.

"Ring, ring... ring ring" goes this telephone.  EVERYONE turns and looks at the culprit.  Yep, Mr Funnyman ... who blinks his eyes and looks 'baffled'.  I fill him in.
So, up he stands and starts singing - boisterously - with the actions.  Mr Showman!  Everyone hoots and claps and laughs and joins in.  Energy now higher than ever - we continue on.
I ran into him again at a conference I spoke at on Friday.  And he commented that because he was afraid he may offend some people he tries very hard not to be funny.  In other words, he hobbles himself, he puts himself in a straightjacket rather than run the risk of offending someone.
Good Lord!  I hunger for funny people.  Love running across them.  Welcome their wackiness.  Enjoy their view on life.  Laugh alongside them. So refreshing to find someone other than a retail robot (of which there are a gazillion).
We chatted afterwards and he reminded me of the 'I'm a Little Teapot episode' - memory came flooding back.
My advice to him?  "To heck with it.  Rip off the straightjacket and just be yourself.   You're smart enough and wise enough to know who you can and can't 'play with'... and the reality is - you can be as politically correct and as boring as is humanly possible and you'll still offend someone somewhere."
I'm hoping he throws off that straightjacket and shows his customers who he really is rather than trying to be someone he thinks they want.