It's not about the sweeping... 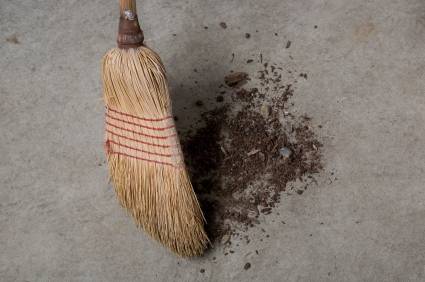 My first ever job was in retail.  I loved it!  Having grown up in the country, treks to town were rare (aside from going to school ... and that didn't count!) so to be able to spend all day every day around shops and merchandise and interesting shop people was heaven.
One of the jobs I longed to do was to sweep the footpath.  I know - it sounds ridiculous.  But I so wanted that job.  Why?  Because the boss swept the footpath every single day and it took him forever to get it done.  I was convinced I could sweep soooo much faster and better.
What I was missing (at my tender 'know it all' age) was why he swept the footpath.  It wasn't necessarily worse than any other piece of footpath outside a shop.  In fact, given my druthers, I'd probably have swept it twice a week.   Job done. Time saved.

Noooo way.   Every day, like clockwork, the minute the front doors opened, there he was in his 'sweeping apron' and broom - sweeping, sweeping, sweeping.  (And my boss wore a suit every day of his working life!!)
And every day customers would slow down and chat to him.  He seemed to know everyone in town.
Almost without fail, in he'd come to the shop - customer in tow - saying something like "This is what I was telling you about...."as he handed the customer the particular piece of merchandise they'd been talking about.
And then he'd say "I'll leave you in Deb's capable hands.  She can sort it out for you, Joe (George, Jane, Dora, Bill...)" We took over the wrapping, payment, delivery.   In the process we got to know the customers.
And in the meantime my boss got to go back to sweeping.  And bringing in the next customer...
Some days it took him 2 hours to sweep that footpath!
How different it is today.  Not an apron or broom to be seen.  No shopkeeper going about their business OUTSIDE, bringing their customers INSIDE. Little sense of community.  And, let me say, dirty footpaths smack bang outside their shops!
I get an enormous feeling of warmth when I do see the occasional shopkeeper out front representing their business on the street... and I feel like cheering and clapping loudly when I see them engage their customers in conversation.
How nice it would be to see this 'retail theatre' resurrected and brought back to our strips.   What do you think?

Postscript:  I did finally get to sweep the footpath, two years in and on the two weeks my boss took holidays. I had 'gotten' the message by then...